Rowser after I had given him a summer 'do' with a pair of scissors.  If you read my book, the photo is of the baggage scooter that Frank helped fix that resulted in a trip to Colorado and a life changing event.


Excerpt from "The Bridge Over Cedar Creek"


My two closest personal friends were Buster and Jimmy.  We were thrown together more by circumstance than choice.  My best friend was a clear choice. I first met him one late afternoon, when my Mother pulled a box out from under a bed in a stranger’s house somewhere in the city of Miami.  A close friend of my Mother's, who I lovingly referred to as "Aunt Lyda", though not related to me, thought that a small boy with no siblings should at the very least have a dog.  When I first looked into the darkened and not-very-good-smelling box, I saw five or six tiny rodent-like animals squirreling around in a mass of dampened cut newspaper and soggy cardboard, squeaking like mice.  Several I was told were taken, but there were a few remaining to claim.

I had a dog briefly while living with my stepfather, but without permission while he was working in the backyard on a gate, I took my friend for a walk without a leash and soon ran home to inform my Mother and her several party guests that he had been "run over" by a speeding car. The last I saw of him was his tiny little blond corpse in a trash can by the street.


Of the three remaining pups, two lay quietly together while the third, which I was told was the runt of the litter, attacked me with his tiny pink-and- purple tongue, as if radar homing in on a target.  He shook all over, and his little rat like tail vibrated with the frequency of a radio signal.  He seemed to wink at me (as if to say), "I'm your guy!  Chose me, and I will never let you down".


The choice was clear, although he was half the size of the others and looked like a dirty mop and smelled worse.  His nose was black. His eyes, although barely open, were the deepest liquid brown I had ever seen, almost as deep as my own.  His coloring was black, interspersed with dark brown fading to a rust color, and his tail, though almost bare, curled over his tiny back.  He was truly a mongrel. My Mother referred to him as a Heinz fifty-seven varieties.  As I gently picked him up my Mother said, “No, not that one Son. I don't think he will even survive.  He is the runt.  You will be disappointed if you chose him.  What about this little girl curled up here, or maybe her sister?  They are precious."


It was settled.  I knew instantly which pup I wanted.  I was just six, but if you wanted to know my opinion, all you had to do was ask.  The runt would be coming home with me; no other would do.  All I needed was a name.  What will I name this potential champion? I thought. As I looked over and saw my Aunt Lyda's huge smile I knew I had selected the right one.  My Mother commented, "Don't worry about a name yet, Son, he cannot come home today.  He is too young to leave his Mother, because he has not been weaned.”


That was the first time I had ever heard that word, and it became a word I forever associated with disappointment.  The tiny, almost helpless little critter was warm and soft in my hands.  He wet all over my hand and wiggled like a newly dug night crawler.  He was the puppy I wanted, and nothing would do but that I have him.  I don't think I had ever wanted something so badly.  I put him back in the box gently as the breeder slid it back under the bed.  I could see him clearly in my mind and knew we would be friends forever and ever and ever.


Weeks passed and I asked every day, "Is this the day?  Is this the day? Can we go get him?  Can we?"  I wrote my Father and asked his thoughts on an appropriate name.  When the day finally arrived, my Mother was sure I would be disappointed in the name I had chosen, because she was certain that one of the remaining females would be the only live puppy, and the name I had chosen certainly did not sound very feminine.  The breeder had promised her that she would save a puppy for me.  When the woman pulled the box out from under the bed, there was only one pup remaining.  Rowser was four times his original size, had a bushy tail and a long nose, and looked every bit the part of the shepherd-chow mix that he was.  He had to be the most beautiful dog I had ever seen.  Sergeant Preston's dog, King, paled in comparison.


We took him home, and over the years he became the neighborhood dog and love of the entire community.  If anyone wanted to find me, they only had to find my "shadow".  He followed me to school and slept under the portable classroom all day for years until some "do-gooder" threatened to call the dog pound.


Rowser slept outside the Circle Theater Saturday mornings and often had to endure a double feature.  He would raise his head off his paws every time a child opened the door, and the ticket taker always had a large bowl of water for him.


One time he was left in front of a drug store while I thoughtlessly exited the back door, not thinking of him until well after dark.  When my Mother and I drove up, we watched briefly from a distance as he raised and lowered his head every time the door opened in the dark.


Since my Mother was working from home at the time, he was banished from the school yard, much to the chagrin of many of the teachers and my classmates, she was able to restrain him until after I left for school.   She would keep him locked on the back porch.  Somehow he had the good sense to wait until three o'clock, but when his internal clock told him to go fetch me and "carry me home", off he went.  He would meet me at the school gate, his bushy tail going a mile a minute.  His entire body would shake and then he would roll over to have his tummy scratched.


When we slept together in a tent, appropriately called a "pup tent", I would come home smelling like the underside of a car and wet dog.  He would allow me to use him as a pillow until he sensed I was asleep and breathing deeply.  He would follow me the fifteen miles I rode my bicycle to reach my horse Smokey, until his paws were bloody and raw.  He would dive in the many barrow ditches along the roadside and keep coming with his pink- and-purple tongue waving like a tattered red-and-purple Confederate battle flag in the wind.  He would slide down the school slide and swim with me at Bare Ass beach.  He had his picture published in the local newspaper riding in the front of my Truckster scooter with his ears blown straight back and pinned against his head.  He was hit by two cars, a school bus, and a pickup truck, but was never seriously injured.  Once he was smacked so hard that his intestinal sac broke somewhere in his bowels, causing him to smell like flatulence for days, but he didn't even whimper.  He finally learned to cross at the crossing lights and would always look both ways before he scampered across the street.  There were no leash laws in the fifties, so he ran free all of the time except when sleeping on the screen porch, where he created a long black line six inches off the floor from wall to wall from his seldom- washed body.  On hot days Mrs. Ramsay chased him lovingly out of her cool, wet flower bed hundreds of times, only to have him return and start digging before she closed the back door.  The Headmaster of the Catholic Church School across the street allowed his two Doberman Pinchers to attack him and soon learned that the vocabulary of a preteen boy could be quite colorful, and that the Doberman was not nearly the dog a determined runt chow was in an honest fight....one ran, and the other whimpered and jumped back in the car.


Rowser was my dearest friend, my closest confident, and the most loyal little brother a small boy could ever have had.  I knew he would always be waiting for me.  He would always be at the back door with his head resting on his paws, looking forward to the next adventure.... 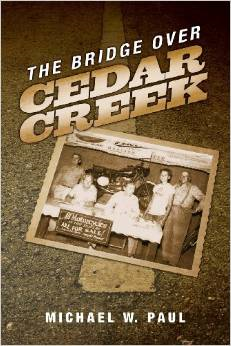 Available on Amazon and Kindle
The Bridge (Over Cedar Creek), constructed during a distant summer over a small Colorado stream by a boy and two curmudgeonly old men, serves as a metaphor for timeless life lessons learned and the beginning of the boys coming of age. Although fiction, the book is taken from real events and some real people. Others are composites taken solely from the imagination of the writer and distant memories. Written in the vernacular of the time, the characters come to life with the help of the authors vivid description. The reader can feel the cool breeze off the river, smell the scent of pine and see the brilliance of the sequined mountain night sky.
Meet the Author: 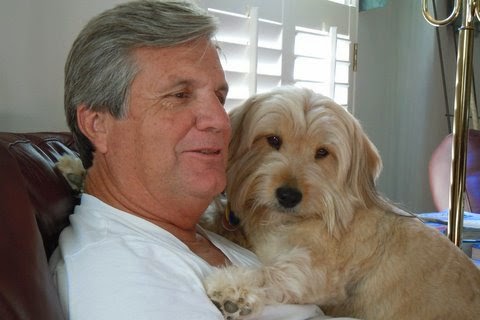 Katie loves the beach. She was adopted about seven years ago when she was thought to be about three years old.
Michael Paul is a lifelong dreamer, a lover of learning and new experiences. In this, his first book, he tells of a boy awakening and beginning his ascent into manhood with the guidance of a wise and thoughtful adult. He lives in Buford, Georgia with his wife of forty seven years, his faithful rescue dog Katie and a Cat.

Posted by Barbara Barth at 4:57 PM