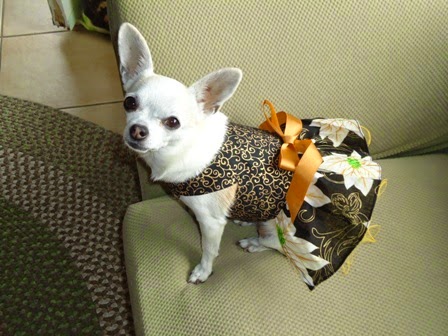 Dixie
Small Packages
Her name is .   She is a seven-year-old, 5.08-pound Chihuahua and yes, I’m one of those goofy owners who, on occasion, have been known to dress up their dog.   What can I say?   I was denied a Barbie as a child.

Unlike me, she does not need an IV of coffee to wake up in the morning.   Her eyes spring open and she’s ready for the day.   It’s usually about 7:00 a.m.   I hear her stir and try to stay still as I can.   I do not want her to know I’m awake yet, hoping to get a few more minutes of respite from an increasingly crazy world.  I can feel her staring at me from her perch on my pillow, her breath at my ear, then her tiny tongue ever so lightly on the tip of my nose – and I’m screwed.   Just a one miniscule twitch, but that’s all it takes.   She pounces:  “I know you’re in there!”  I roll over and duck my head under the covers, but to know avail.  When the Chihuahua is awake, everyone is awake.
Finally, I give in and out we go for her morning potty.   Dixie was very easy to potty-train because every time she peed or pooped I would always clap and shout “Yay, Dixie!”  I sometimes wonder what my self-esteem level would be if every time I peed someone would clap and shout, “Yay, Jayne!” but I’ve yet to find that kind of devotion.

Into the kitchen we go to get her breakfast, prancing at my feet.   I get the can from the refrigerator, scoop out a large tablespoon onto a saucer, and stick it in the microwave for nine seconds -- no more, no less -- so that it is just the right temperature for the princess.   The sound of the timer going off sends her into a dizzying twirl of anticipation and joy known as the “Happy Dance.”   Dixie is the very definition of joy.   She’s exploding with the stuff.   This can be hard to take when you’re a natural born curmudgeon like I am, but damned if she isn’t winning me over.  Still no coffee and yet here I am smiling.

As a puppy, Dixie was highly influenced by my elderly cat, Chelsea, who slept most of the day.  So Dixie eats her breakfast, then back to bed she goes leaving me to meander into my office to begin my day’s work.   For most of my life I was known as a “cat person.”   I preferred cats over dogs for the same reasons many do not – their complete indifference to what you think of them:  Feed me, clean my sand box and maybe, when and if I’m in the mood, I’ll let you pet me.  That’s something I can relate to, and yet another possible reason why I’m single.  But, somehow, this tiny creature has totally stolen my heart and I live to do her bidding.


My work day ends promptly at six.   I know this not because I have a clock, but because every day, at just that moment, Dixie will bring her toys, one-by-one, into my office.  First, the purple bear.   She looks up at me with it in her mouth, her big brown eyes telling me it’s time to play now.   If I fail to respond, this will go on until her toy basket is empty -- the pink flamingo with one foot chewed off, the little yellow chicken with the broken squeaker, the “Grrrrrona” beer bottle complete with stuffed lime in the top – until finally I shut off the computer and engage in a rousing game of fetch.


“Goooooooo get it!” I shout, followed by a shrill and rapid “C’mere, c’mere, c’mere, c’mere, c’mere…”  She never tires of this.  I will collapse before she does.
Dixie also enjoys watching TV, mostly reality shows, “Underdog to Wunderdog” being her favorite.  I pick her up and she crawls up my chest, comfortably settling onto “the boob shelf.”  There is something about loving a little dog that is so visceral, especially when she is sitting right on top of my heart, her breath rising and falling with mine.   I cannot begin to describe how calming it is.   Okay, not a few glasses of Chardonnay or a couple of Xanax calm, but pretty damn near.   And you can still drive if need be. 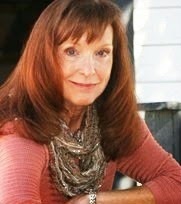 Jayne Martin
Jayne Martin’s book of humor essays, “Suitable for Giving: A Collection of Wit with a Side of Wry,” is available in paperback and digital formats.  Her short story “The Heart of the Town,” won the Fall 2013 WOW-Women On Writing Flash Fiction Competition.  Previously, she wrote for television.  Credits include “Big Spender,” written for Animal Planet and available on Netflix and Amazon.  You can find her daily at injaynesworld.blogspot.com. 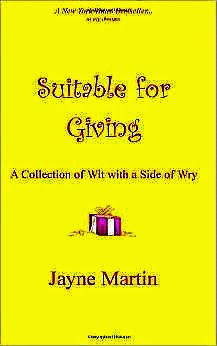