#1 Our First Contest Entry From Writer With Dogs Magazine

Cheska: entry number l in Writer With Dog's Magazine Contest.
(See side bar to link to magazine for contest details. The dog with the most comments on Feb.14, 2011 wins!) 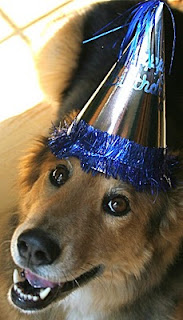 Our dog, Cheska, is a rescue: we found her on PetFinder.com where she was listed by a lady who had gone to the animal control shelter in Harlem, NYC to pick up a golden retriever, and they begged her to take this sweet dog, also, because she was due to be euthanized because of overcrowding there.
We've had her DNA tested and she is at least 25% German Shepherd, at least 25% Chow Chow, and (to our surprise) at least 25% Labrador Retriever.

Since we've had her she's survived cancer (lost one of her back toes in the process), xylitol poisoning (she "counter-surfed" and ate some sugar-free gum while we were out), and anaplasma (tick-borne disease with ultra-high fever).

She may have racked up some hefty vet bills (in the thousands), but she more than justified the expense last year when she prevented our house in upstate New York from burning down:

One morning around 6am she was pacing nervously and woke me up.  I assumed that a thunderstorm was approaching (she's terrified of them), so I went downstairs to shut off our battery backup units (so their alarms wouldn't go off if the power went out).  Cheska followed me, and stood at the top of the basement stairs staring at the door and doing the classic "Lassie Whine".  Curious, I opened the basement door and heard a strange and ominous crackling sound.  It turned out to be the electrical panel, which was sparking loudly/dangerously!  We called our electrician who told us to turn off the main breaker to the entire panel/house immediately and he'd be right over (on a Sunday morning, no less!).  Long story short: due to a badly installed gasket in the electrical meter on the outside of the house (by our local power company), water was leaking in and down the cable directly into the panel.  If Cheska hadn't warned us, the entire house could have burned down!  (The entire panel/meter had to be replaced.)

So it turns out that we have rescued each other - talk about manifestation of good karma! :-D