Cary Robinson and The Dudley Files

Award Winning Dog Comedy Mystery Novels:
The Dudley Files: Sold Out Without The Holdout
Burp Gun Bandit: Book II of The Dudley Files
Midwest Book Award Winner
Readers Favorite International Award Finalist
Available on Amazon and the author's website.
Book Plots:
The Dudley Files: Sold Out Without The Holdout -  Available on Amazon
A young man nicknamed Careless by his friends (although he claims to have no friends) is coerced, then seduced, into a life partnership with a big golden-colored hound dog named Dudley (not that there's anything wrong with that). Once Dudley is rescued from the SPCA, their man/dog bromance brings together one's peculiar appreciation for seemingly obscure details with the other's supremely talented schnoz. Their warehouse loft neighbors-a sharp-tongued beautiful blonde named E.D. (who has no interest in Careless, but not for a lack of trying on his part) and Sarge (a stammering throwback from the '60s)-join the pair when road-raged, redneck friend, Birk, learns of a mystery involving their favorite country western singer.
Against the backdrop of the Houston Livestock Show and Rodeo, Careless continues to be thoroughly slobbered on by day and spooned every night by the large hound dog (not that there's anything wrong with that either). Careless is a fictional character concocted by Dudley, the hound dog, who swears the story is true… well, mostly true.

Book II of The Dudley Files, an award winning Dog Comedy Mystery Novel, brings back Dudley, the golden-colored hound dog, with his life partner, Careless, E.D., a blonde beautiful, sassy upstairs neighbor, Sarge, an idiot savant throwback from the '60's, and Birk, their redneck friend with road rage, as they solve the disappearance of a pet miniature donkey named Eddie in The Texas Hill Country and a diabloical mystery surrounding an old World War II rifle that some may say takes on a supernatural flair.


The real story on Dudley:


We were at the end of the aisle next to a window with light streaming in. We were about to leave. As Birk and I turned to leave I suddenly felt a warm feeling come over me and felt like I was being watched. This was very strange and when I looked around, I saw in the very last dog run a large, skinny, fawn colored dog. He had a big head and the most beautiful brown, expressive eyes I had ever seen. He was a large dog but he was quite skinny and I wondered if the SPCA volunteers were feeding him properly. It hadn’t hit me yet but we were going to meet each other and fall in love. I kept walking with Birk and we were going to leave but something made me look back at that last cage with the sunlight just beaming into it. It was almost as if the sunlight was glowing. Then I noticed that the dog had pressed himself very tightly up against the dog run chain link gate. His coat was shimmering in the sunlight. He wasn’t carrying on like the other hooligan dogs that were making all kind of noises. He just pressed himself up against the chain link gate, stayed silent, and stared me right in the eyes with his big, brown, beautiful eyes. At that point I had not noticed it but my feet had stopped moving and something was pulling me back to him. Birk walked on ahead and kept our conversation lively but some kind of force or power starting pulling me back to this dog and I was compelled to follow it. I don’t really know if there is such a thing as divine intervention but this was probably as close as I would ever come to noticing it.

Instinctively, I reached down with both hands and starting rubbing the dogs back as I stuck my fingers though the chain link gate. He had very short, fawn colored hair. It was somewhat coarse and yet soft to the touch. It was also very shiny, almost like gold. I could tell that it made him feel good and I realized that all he wanted was for me to come over and pet him. He just wanted to be touched by me and was acting beautifully. I could also tell that once I started rubbing him that his whole body began to relax almost as if a big sigh was coming out of him. No barking or jumping. It didn’t take but ten seconds for me to fall in love with him. I looked at the manila card that was fastened to his chain link gate. It read, Name:  Dudley, Breed:  Boxer, Great Dane mix. Eats dry food and is good with children and other dogs. Primarily kept outside and loves people, likes to play, and ride in car. Loves to snuggle and is very friendly. On the card it was also written that he was between six and eight months old.

Well, Birk was still walking ahead chatting with me even though I hadn’t been there for the last several minutes. I wondered just how long it would take him to figure out that I wasn’t walking right along side of him. Apparently it didn’t take that long because I saw him starting to walk back towards me with a perplexed look on his face. While rubbing Dudley through the chain link gate I looked at Birk and then shifted my gaze back down to Dudley who hadn’t broken eye contact with me since the moment I laid eyes on him.


Even though this was much different, I didn’t want a repeat of what happened with Bubba. Bubba was okay but he was definitely no Dudley and he was now in the past. I looked back at Birk as he nodded his approval, then looked back at Dudley as he nodded his approval so I snatched his manila card off of the cage so that no one would be able to take him away from me. It was a weird feeling because I had cared for other animals before but this was different. It was as if the acceptance of the forces of the universe were flowing through us or I guess it could have just been a bad case of gas but either way I wasn’t letting Dudley out of my sight. I was exhilarated, anxious, and downright scared but I knew it was the right thing to do. I felt really good about it and I could tell by the look on Birk’s face that he was in agreement but still, he would test me.


Birk said, “I’m sure he’s a fine animal and if you really want to adopt him then that’s fine Careless but the SPCA receives tons of dogs in here every day and this isn’t something that you should rush into. Maybe we should think about it and come back tomorrow.” At that point I was clutching Dudley’s manila card so tightly in my hand that no one except perhaps God would be able to pry it from my kung fu grip. I firmly told Birk, “Dudley’s not an animal, he’s my friend and I’m not leaving here without him!” With one hand on Dudley’s back and the other squeezing the manila card I stood there and stared Birk down in defiance. He finally shook his head up and down and acknowledged that Dudley was the one. A young couple walked by and stopped to look at Dudley. They looked nice enough and I’m sure they were very deserving of a great pet. Dudley then growled somewhat under his breath and I said to them, “He’s taken, move along, nothing to see here!” I said it in the nicest way possible but forcefully enough so that they got the point. They just frowned a little bit and Dudley helped them along their way with a series of low growls which they seemed to not appreciate at all. I must admit that I was laughing a bit inside along with my new best friend, Dudley. Once they had completely passed by he became passive again and looked at me as if I were the only person or thing in the room. I’m pretty certain that he only had eyes for me and wouldn’t be happy until I brought him home with me.

This is the beginning of Chapter 8 of Book I of The Dudley Files. Other than a few small embellishments, it’ exactly how I met Dudley.


Fast forward ten years and his lifetime of great times and being a cherished member of the family, I lost him to cancer. Needless to say, I was devastated. I’ve had plenty of dogs and still do, but this one hit me hard. As my therapy, I decided to jot down all the funny things he used to do (and there were quite a few, as he was a real character). Later, I was in the shower and it hit me:  I would try to write a dog comedy mystery novel about Dudley, so everyone could get to know him. I had no formal training but did it anyway.


One thousand hardback copies and ebooks later, it turned out Dudley had a following and they wanted more Dudley Files books. Book II drew 170 well wishers at the signing and now I’m writing Book III.


Now I donate all my proceeds to local animal shelters because I think Dudley would have liked that. It’s given me a new purpose. A quote from Book II:  It was a natural progression to my obsession.

About the Author and The Dudley Files: 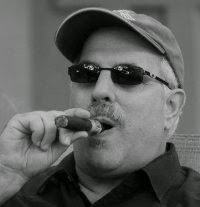 Author Cary Robinson
Cary Robinson is an author and dog rescue advocate.
Cary Robinson typed up this funny dog mystery novel for Dudley because much like his driving, Dudley's typing stinks. Dudley started off with very little in life. After an extended stay in the executive suite at The SPCA, he found his life partner, not that there's anything wrong with that. He became famous after solving a mystery during The Houston Livestock Show & Rodeo but still goes to work every day and even takes phone calls. Please be warned, his phone skills are lacking. This is a classic American tail of wags to riches. Dudley is a great Texan!
"Here's my favorite picture of my boy, Dudley. I think of myself as his Dr. Watson. I write stories about his exploits." 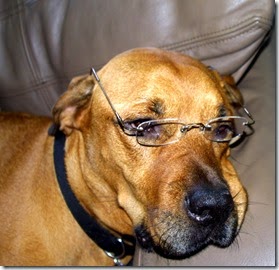 The late Dudley. His exploits live on. 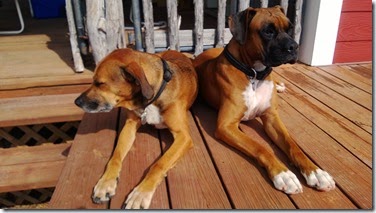 "The new dogs: Medina & L.E. I rescued Medina from the Kerrville City pound eight years ago. I had to get her away from all those Kerrverts. She was slated for death that morning. I found L.E. on the street two years ago. She was almost dead. They get along really well together."
Links:
Author's Website Golden Hound Press
Buy The Books: Author's Web
Amazon Books for Sale and Author's Page
Author's Blog
Animal Adoption
Facebook
Contact The Author
Twitter @DudleyFiles
Every Dog Has A Soul. Every Soul Has A Purpose. Purpose Is What Defines Us.
Golden Hound Press