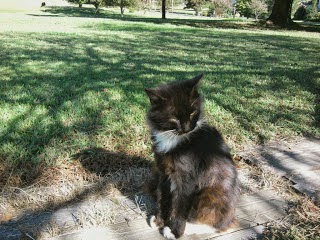 Perhaps Methuselah would have been a more appropriate name for her, but at the time, we didn’t know she would live so long! Instead, we decided to call her Squeak, since that was the only sound she could utter around ten days of age when we found her.


Even above the roar of the lawn mower, I thought I detected a strange, high-pitched noise. Probably just a bird, I rationalized to myself, but it certainly does sound like a tiny kitten in distress. Oh well, just my imagination I suppose.


However, when I finished mowing and turned off the engine, I knew, without a doubt,   what I heard was a frantic little kitten calling for help. This was not the usual meowing sound, rather an eeekkk, eeekkk, eeekkk, much like that of a squeaking rusty wheel.


There was no way I was going inside that hot August afternoon without locating the little critter. After all, she desperately needed me. I tried to call out and listened intently for her answer, in order to track the origin of those pathetic urgings. Quite soon, I discovered the sound came from under the barn floor. Stretching out flat, I peered under the boards into the darkness, and reached carefully inside calling, “Here, kitty, kitty. Here, kitty, kitty.”


Much to my delight, about ten feet away, I could faintly detect a tiny form wobbling straight toward me. There was none of the usual feline hissing, screeching, and scratching or hair-raising fear from this eager little character, who instinctively sensed I was not the enemy. She was absolutely correct. The two of us have been best buddies for almost twenty years now and “Squeak” has earned the well-deserved title of ‘Matriarch’ of our large menagerie of pets, with whom she has cohabitated or, in a few cases, simply endured over the years.  Clutching the fluffy little mite to my chest, I ran hastily into the house.


“Ray, Ray,” I excitedly yelled. “Look what I just found under the barn floor!”


He didn’t seem the least bit surprised by my joyous announcement.


“I know. I heard it a couple of days ago but didn’t tell you. I knew you’d find it sooner or later. That’s just what we need around here, another animal to look after,” he said with a sly grin.


“But it‘s so tiny and it’s all alone. I couldn’t just leave it there by itself. The poor little thing is hungry and scared.”


And so, as my sweet husband had done for me in so many similar instances over the years, he gave in and agreed to keep this squeaky little orphaned kitten.


But as Granny Johnson use to say, “There was a fly in the ointment.”


Although Ray puts up with my pets, I have always been their primary caregiver. He prefers to be simply an observer. It suddenly struck me that a slight problem might be in the works the next couple of days. You see, I had made plans to be out of town with a friend the coming weekend, but now I had this sightless, helpless little kitten to feed with an eyedropper every four hours. What to do, what to do?


“Dear, do you think you might be able to take care of Squeak while I’m gone? We’ll be back late Sunday afternoon. It’ll be easy. I’m sure you’ll do a good job.”


After the two of us negotiated the subject for a bit, he begrudgingly agreed to take care of the tiny black and white kitten while I was away. I knew he wasn’t keen on the prospect of this responsibility, but would do the best he could, thinking surely he could keep it alive for just two days.


Sunday evening I hardly said hello as I dashed in and abruptly dropped my suitcase with a thud by the back door.


“How’s the kitten? Is she alright? Where is she?”


“Oh sure, she’s fine. She’s sound asleep over there in her basket, snug as a bug in a rug.”


“Did you get her to eat something while I was gone?”


“Yeah, she did just great. You can see for yourself. Her food bowl is empty.”


“Food bowl! What do you mean? Didn’t you feed her with the eyedropper? She doesn’t even know how to lap yet!”

“Oh, yes she does. After the two of us went round and round with that stupid eyedropper, I said… ‘To heck with this’. I put her milk in the saucer, stuck her face in it, and told her to eat or die. She’s been eating ever since. Squeak and I made it without any problem. Did you and Joyce have fun?” and with that he calmly resumed his reading. Stunned by his response all I could do was stand there in silence, not believing his words.
Yes indeed, Miss Squeak has been eating quite well ever since and has developed a personality definitely her own. I’m forever amazed at our ability to communicate with each other, not as simply cat to person, but friend to friend. I realize some folks might think this is weird thinking on my part, but just ask any animal person…they understand what I mean. This is her place and we are her people. After all, the choice was hers in the beginning. I sometimes wonder if her soul was here years before any of us occupied this old farm and it wouldn’t surprise me if it remains long after we are gone. 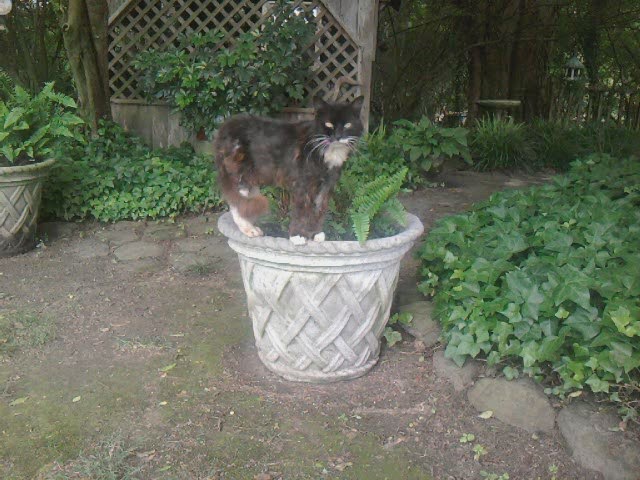 Posted by Barbara Barth at 5:29 AM No comments: