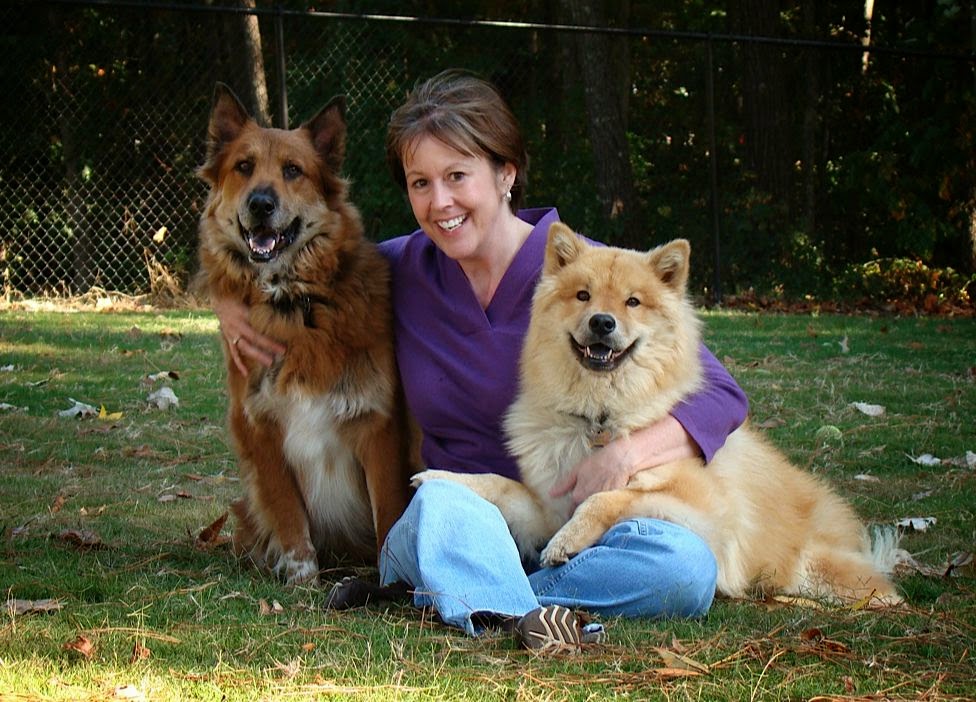 Valerie Connors with Coco and Ginger


Our girls, Coco and Ginger, always keep me company when I’m writing. Whenever I sit down at my desk, within minutes I realize that both dogs are either stretched out on the floor beside my chair, or poised at the front window, side by side.  They keep a careful lookout for any potential threats to my wellbeing, such as another human walking past our house, or a delivery truck that has to stop briefly at the curb.  The good news is that even when I’m home alone, no one will ever be able to sneak up on me.  In fact, they’re particularly vigilant when my husband isn’t home.
There’s something so calming about having sleeping dogs in the room.  I’m alone at my desk so much of the time, it’s really nice to have their company, and as an added bonus, they rarely interrupt my thoughts, unless of course the UPS man arrives, or the neighbor’s cat dares to enter our front yard.
If for some reason I’m at my desk for more than a few minutes and the girls don’t appear in my writing room, I’ll always go looking for them.  It’s their job, after all.  Being a muse is sometimes hard work, but they’re always rewarded with love and treats.
Since I work full time, I tend to be a binge writer, so when I have a day, or days, that I can spend writing, it’s not unusual for the girls to keep me company for nine or ten hours in a row, with only occasional trips to the backyard.  Coco and Ginger perform their job with enthusiasm, patience, and an overall good attitude.

Both girls are rescue dogs.  Ginger, the older of the two, is a Samoyed/Chow mix, and while she doesn’t get around like she used to, she’s still a valued and contributing member of my writing team.  Coco is an Akita/German Shepard mix, and she’s eighty pounds of pure sweetness.  But she has a bark that makes the UPS man jump right off the porch.  I think that makes her the perfect dog. 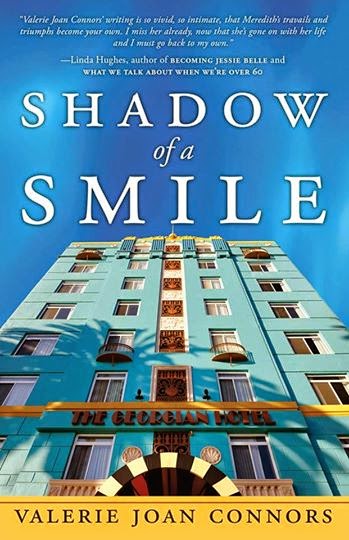 Following the untimely death of her mother in 1992, thirty year-old Meredith Springfield learns the shocking truth about her origins, the father she never knew, and the mother whose life was very different than it appeared.  When the attorney who prepared her mother’s will delivers Anastasia’s personal journals along with the keys to a trust fund Meredith never suspected she had, she and her boyfriend Derek embark upon a journey from Chicago to Los Angeles in search of answers, and to carry out Anastasia’s wish to have her ashes scattered in the Hollywood Hills.
In 1960, at twenty years old, Anastasia left her parents and the cold mid-western winter behind in Milwaukee and drove her powder blue Ford Fairlane down Route 66 all the way to Los Angeles, certain that’s where all her dreams would come true.  Just two years later, Anastasia is forced to retrace her steps, traveling back to Milwaukee with her dreams already shattered, a broken heart, and a daughter she would have to raise alone.
Shadow of a Smile takes the reader on two journeys across historic Route 66, from Chicago to Los Angeles, and back.  The first follows Anastasia to 1960 Los Angeles and the beachfront hotels where she would meet the man of her dreams and take to the stage for the first time.   The second, thirty-two years later, takes Meredith and Derek on a journey of discovery that has a greater impact on their lives than they could ever have imagined.
Once Anastasia is gone, and her carefully hidden secrets are revealed, Meredith gains a new perspective on her own choices, and must come to terms with the grey area between what our hearts desire and what is right.   Shadow of a Smile is a story about family secrets, the choices we let our hearts make, and living with the consequences.

Praise for Shadow of a Smile:


"From the moment you enter Meredith Springfield's world, you will feel as if you are alongside a dear friend on her amazing journey to self-discovery. Valerie Joan Connor's writing is so vivid, so intimate, that Meredith's travails and triumphs become your own. I miss her already, now that she's gone on with her life and I must go back to my own. A story of love and lies and life, Shadow of a Smile is a must read." ……….Linda Hughes, author of Becoming Jessie Belle and What We Talk About.
"Shadow of a Smile examines the large price paid for secrets and cover ups, not just by the perpetrators but also by generations before and after them. Ms. Connors has written a novel for anyone who likes family and relationship stories that are emotional, complex, and altogether satisfying."………George Weinstein, author of Hardscrabble Road and The Five Destinies of Carlos Moreno
With extraordinary deft, Valerie Joan Connors explores how we take responsibility for our actions and their consequences.  In Meredith Springfield, Connors has created a woman who discovers truths about her own relationships and the consequences of her actions and how close her life has comes to mirror her mother's.  We follow Meredith on her journey along roads her mother traveled with all their twists and turns and nests of lies and secrets.  Shadow of a Smile has layer on layer of emotion, anger and pity, joy and sadness--interwoven, juxtaposed, and "back to back"…………………Rona Simmons, author of The Quiet Room
"Valerie Connors has a distinctive voice. Each scene is filled with secrets and longing. Each character is brave and steady and real." …..Nicki Salcedo, Author of All Beautiful Things 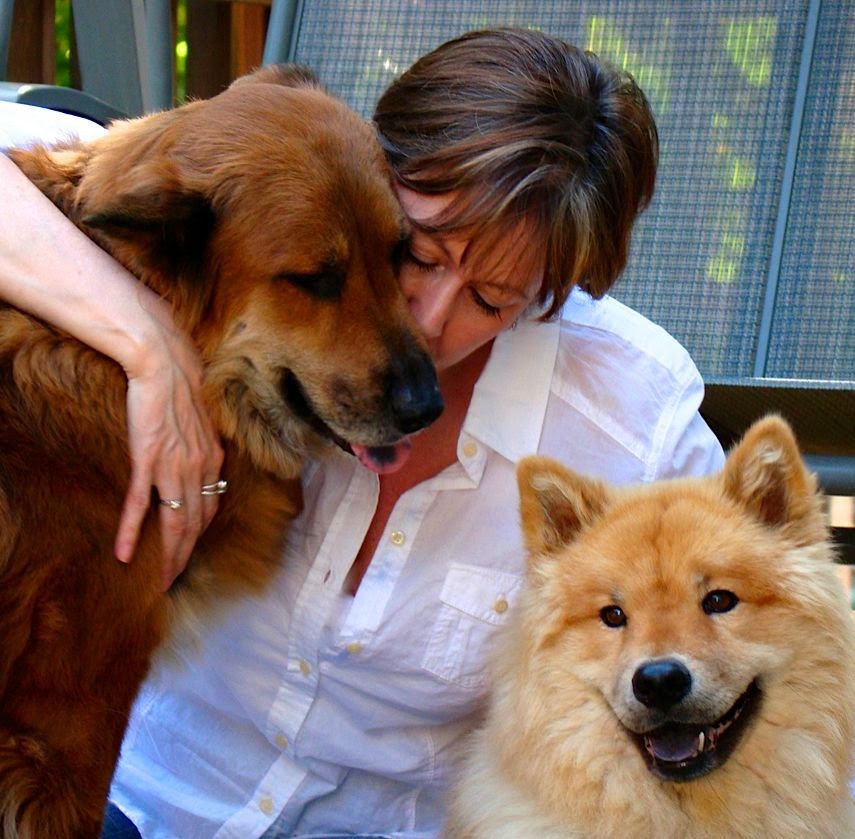 Valerie Joan Connors is the author of three novels, and the current president of the Atlanta Writers Club. Her second book and first traditionally published novel, In Her Keeping, was released in August of 2013 by Bell Bridge Books. Valerie's first novel, Give Me Liberty, is a historical story set in New York just after World War II, and was self-published in 2010.

During business hours, she's the CFO of an architecture, engineering and interior design firm. Valerie lives in Atlanta with her husband and two dogs, Coco and Ginger.